The Tin Horn carries a variety of old and new items. Antiques and primitive pieces share space with new decorative items for the home and a wide variety of gift items.  In addition to oilcloth, candles, toys and “penny candy,” there are local products including jams, jellies and maple syrup.  There is also a beautiful selection of jewelry, soaps and other bath products, laundry fragrances and gourmet food items from Stonewall Kitchen.  There is truly something for everyone at reasonable prices.

The Tin Horn has donated the space in front of the store and its parking lot for use by the Andes Farmers Market which operates on Saturdays from late May to early September from 10 a.m. to 3 p.m.

Why the Tin Horn? The tin horn, along with the Calico Indian, is a symbol of the anti-rent war in the 1800’s, which culminated in Andes with the shooting and death of Undersheriff Steele in 1845. Starting in 1839, farmers in 11 upstate counties, including Delaware County, staged a revolt against the existing system of land tenure, which was akin to feudal serfdom. Under that system, dating from the time of large land grants to politically connected individuals by the Dutch and English governments in the 17th and 18th centuries, all the land in this area was owned by absentee landlords who leased the land to farmers. Many of these leases were onerous and tenants, if they could leave, would receive little or nothing for the improvements they made if they did. 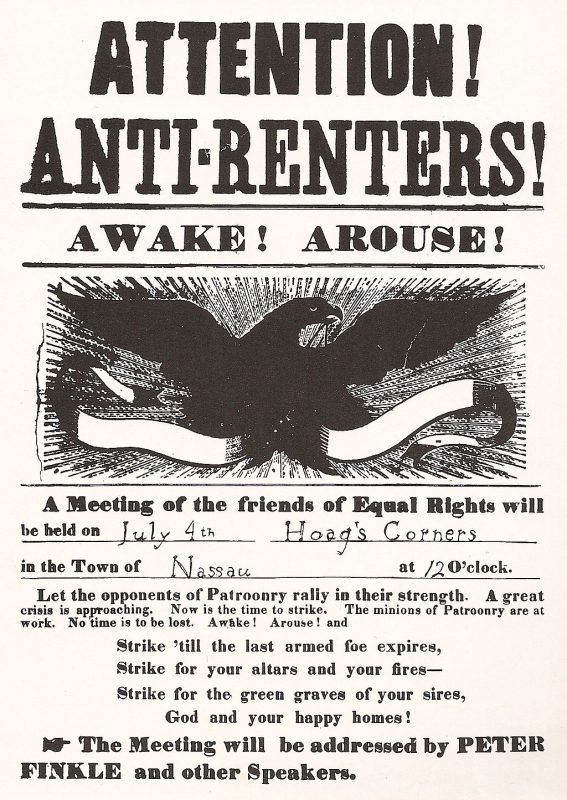 The conflict pitted neighbor against neighbor with those opposed to the system called anti-renters or down-renters and those in favor up-renters. There were anti-rent taverns and up-rent taverns. The Hunting Tavern, down Main Street by the bank, was an up-rent tavern. The Tavern was frequented by Undersheriff Steele who is alleged to have bragged “lead can’t penetrate Steele”.

Those farmers in revolt dressed in Calico dresses and sheepskin masks as disguises, leading to the name Calico Indians. They communicated by blowing tin dinner horns, relaying the sound from farm to farm. At the sound of the horns, the farmers would assemble at a predetermined meeting place principally to prevent sales of personal property, but also to cause other disruptions to law enforcement officials, landlord and supporters of the existing system (including tar and feathering).

A culminating event in the tenant rebellion, known as the anti-rent war, occurred in Andes in August 1845 when Undersheriff Osman Steele was shot and killed at the Moses Earle farm on Dingle Hill, at a scheduled sale of Earle’s personal property to collect money to pay back rent. 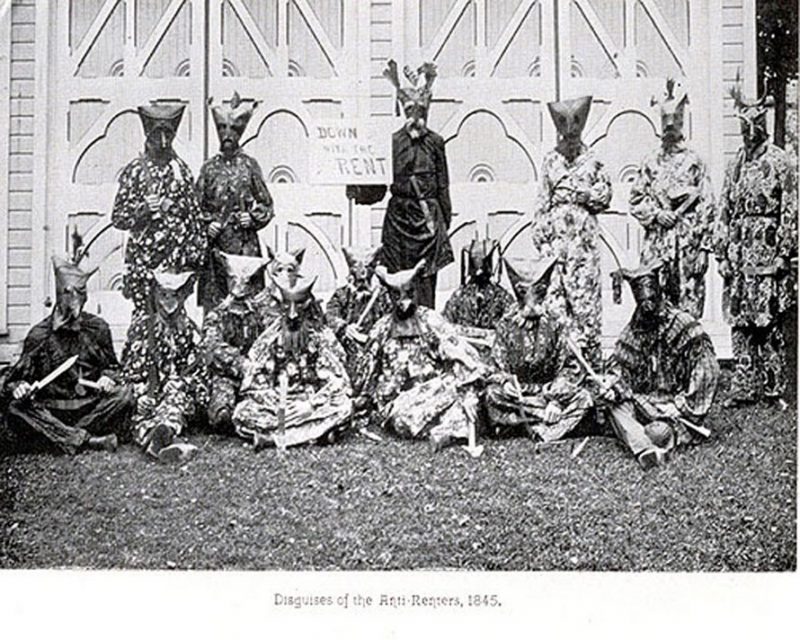 The Governor declared the county to be in a state of insurrection. Many were arrested and convicted and two, Edward O’Connor and John Van Steenbergh, were sentenced to death. The sentences of the two were later commuted and all were eventually pardoned.

As the anti-renters gained political strength, new laws were passed favorable to the tenants, such that the absentee landlords eventually sold the properties to the tenants.

Bassett Hall
The Building in which The Tin Horn is located is named after Peter N. Bassett of Andes who erected it in 1877. Following is some history on the building from the History of Delaware County by W.W. Munsell, published in 1880:

Bassett’s Hall, erected by Peter N. Bassett in 1877, is a prominent building of the village, and one of the best public halls in the county. A part of the frame is the old Presyterian church that stood on the hill east of Main Street. This old church was erected about 1818 by the Presbyterian society which was organized in 1801. The site was a large one, from lands originally owned by Ebenezer, the grandfather of the present owner, and had a front on Main Street from Daniel B Shafer’s residence south to the residence of Hon. R. Morse. The society that owned the property has been long extinct, and the last surviving member, George N. Clinton, united with the Methodist Episcopal church in 1871.

The building was occupied by the Baptist and Associate Reformed churches for a time, and then was unoccupied for several years before it was moved to the present site of the hall. Addition was made to the frame, making the building 30 by 71 feet, and a subsequent enlargement made rooms for the accommodation of the fire department.

Over the years the building served many functions at different times including as a movie theater on the second floor, a number of farm implement businesses and more recently a variety of retail businesses, including Brooke’s Variety, Mercantile and Alfalfa’s Antiques. The Tin Horn Antiques & Sundries opened in 2008 and now occupies the entire first floor.